Cavs prevail in shoot-out win over BC Central

Carman-Ainsworth’s Dewayne Gurley (5) looks for an opening against Grand Blanc on week one.

Gates played a key role in a contest that saw two unbeaten teams in the Saginaw Valley- Blue Conference amass more than 900 yards of offense between them.

175 yards on five completions out of a dozen attempts.

Carman-Ainsworth jumped out to a quick lead on Gates’ 4-yard touchdown run less than three minutes into the contest. Ahmad Clay passed to Trent Barron for the two-point conversion that gave the Cavs an 8-0 head start.

After Central scored to draw within 8-7, Carman-Ainsworth scored twice more in the first frame on a 47-yard run by Gates and on a 73-yard pass from Fletcher to Marshall Brooks. But Central ran off three unanswered scores in the second quarter to take a 27-22 lead into intermission. 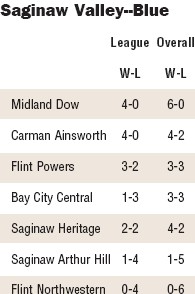 A 10-yard run by Gary Turgeon and a pick-six interception by DarQuavis Tabron in the third quarter erased the halftime deficit and gave Carman-Ainsworth a 37-27 edge. Bay City scored late in the quarter to narrow the gap to 37-34 heading into the final quarter.

Gates scored the only touchdown of the fourth on a 20-yard run that sealed the Cavs’ fourth straight league win.

Troy Brown caught two of Fletcher’s passes for 76 yards. Brooks had his big 73-yard touchdown grab and Turgeon had a catch worth 21 yards. Gates hauled in a pass that covered five yards.

Romeo Evans led the Cavaliers on defense with six tackles while Jalen Smith and Javez Abernathy came up with five and 4.5 stops, respectively.

With the win, the Cavs remain unbeaten in the league at 4-0 and stand at 4-2 overall while Bay City Central slips to 1-3 in the SVL-Blue and to an even 3-3 overall.

Carman-Ainsworth will be home this Saturday to entertain league foe Saginaw Heritage. Heritage will enter the contest with a league mark of 2-2 and an overall record of 4-2. Kickoff is slated for noon.