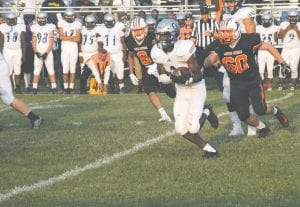 Carman-Ainsworth’s Jalen Smith runs by a pair of defenders during a game with Flint Powers Catholic on September 15.

FLINT TWP. – The Carman- Ainsworth football team fell behind early and had to fight its way back during a 41-31 victory over Bay City Central on Saturday. The game was played on Saturday in conjunction with the homecoming festivities and dance. The powder puff game was played Friday night.

The first quarter didn’t see much action as Bay City Central scored the quarter’s only points with a 19-yard field goal to lead 3-0 headed into the second. The Wolves’ offense then opened up in the second quarter with two unanswered touchdowns, one on a six-yard pass and the other on a fiveyard pass, to lead 17-0.

The Cavaliers then finally got on the board following the two Bay City Central scores with a two-yard touchdown run to trail 17-7. The Wolves answered right back, however, connecting on an 82-yard reception to lead 24-7 at the half.

The second half was a different story, as the Cavs rallied to dominate both quarters to come away with the win. Carman-Ainsworth scored first with a 33-yard touchdown run to narrow the deficit and trail 24-13. Bay City Central marched down the field and answered with a touchdown run of its own to go ahead 31-13, but would not set foot in the end zone for the remainder of the game.

The Cavs then scored two more touchdowns before the end of the third quarter, one on an 81-yard run with an unsuccessful extra point, and the other following a fumble recovery that was taken 22 yards to the house. The score sat at 31-27 in Bay City Central’s favor entering the final quarter, where Carman-Ainsworth would score twice more from runs of 22-and-76-yards to secure the victory.

Individual stats were not reported.