Cavs rebound for win against Flint 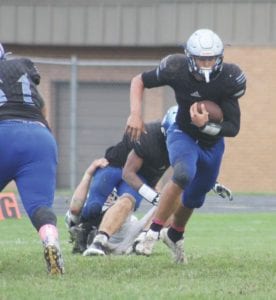 Carman-Ainsworth’s Dustin Fletcher looks for an opening in the defense during the team’s Week Seven loss to Lapeer on October 6. Photo by Joe Oster

FLINT TWP. – The Carman- Ainsworth football team shook off last week’s last-minute loss to Lapeer and scored in double-digits for each of the first three quarters in its 50-14 win at Flint last Friday.

The Cavs scored 21 in the first, 15 in the second and 14 in the third for the comfortable win.

Dustin Fletcher got the Cavs on the board early in the first, scoring on a one-yard scamper for a 7-0 lead with 9:01 remaining in the quarter. At the 6:36 mark, Mike Fletcher scored on a fumble recovery to extend the Cavs’ lead to 14-0. That was followed by a 27-yard touchdown connection from Dustin Fletcher to Norman Montgomery with 1:42 remaining in the first to put Carman-Ainsworth ahead 21-0.

In the second, Carman-Ainsworth wasted little time scoring, as Armani Washington found pay dirt from 13 yards out with 11:21 to go in the half. At the 8:53 mark, Dustin Fletcher connected with Idris Bray for an 85-yard touchdown to put the Cavs comfortably ahead 36-0 at the half.

Flint opened the third quarter with its first score of the game, and even converted a two-point conversion to trail 36-8 at the 7:48 mark in the third. Carman-Ainsworth responded with a 15-yard touchdown run from Joe’shawn Cheatham with 5:30 to go in the third to lead 43-8, and then scored its final touchdown of the game when Dakari Betts connected with Montgomery for a 50-yard score as time expired in the third. Flint managed to score one final touchdown on a one-yard scamper with 3:04 remaining, but the game had already been out of reach.

Bray led the Cavs in receiving with two catches for 97 yards and a touchdown. Montgomery had four catches for 84 yards and two touchdowns and Ro McCree had one catch for 18 yards. Defensively, Mike Fletcher led the way with one solo tackle and six assists. Tanayshio Dones had five assists, Teshan Compaore had one solo with two assists and McCree had two solos.