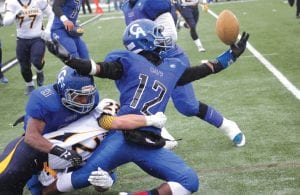 Carman-Ainsworth’s Demarion Allen tries to hang on to the football as he’s tackled in the first half of Saturday’s game against Clarkston at Lake Orion.

LAKE ORION — Carman- Ainsworth had little trouble moving the football last Saturday in its Div. 1 semifinal game against Clarkston. The problem was hanging on to it.

The Cavaliers lost two fumbles and an interception, and Clarkston capitalized on each one to post a 61-26 victory and earn a spot in the state championship game this weekend at Ford Field. The fourth-ranked Wolves (12-1) will play No. 6 Detroit Catholic Central (11-2) at 1 p.m. Saturday.

Carman-Ainsworth ended the greatest season in the school’s 28- year history with an 11-2 record. The unranked Cavs set records for victories and longest run in the postseason, capturing district and regional trophies.

“We just tried to make history, and when we did that, it wasn’t about football,” said Carman- Ainsworth coach Nate Williams. “It was about proving to these young men they can accomplish anything they put their mind to as long as they’re willing to put in the work.”

The Cavs matched the Wolves almost yard for yard on a bitterly cold, windy day, with snow blowing sideways through much of the first quarter. The weather forced both teams to keep the ball on the ground, and Carman-Ainsworth rolled up 384 rushing yards to Clarkston’s 420. But the three turnovers were costly, and the Cavs also turned the ball over twice on downs, once on the Wolves’ 3-yard line.

“We prided ourselves on creating turnovers this season,” said Williams. “I think we might have set the state record with 40-some turnovers. But, we turned the ball over this week and they hurt.”

The Cavs also couldn’t stop Clarkston’s Ian Eriksen, who rushed for 355 yards and six touchdowns on 44 carries. The senior running back added five two-point conversions to account for 46 of the Wolves’ 61 points.

Clarkston never punted and took a 7- 0 lead on Eriksen’s 6-yard touchdown run just 1:35 into the game, a score set up by a Carman-Ainsworth fumble at its own 27.

The Cavs answered with an 80-yard drive capped by Malik Seales’ 26-yard run with 7:26 left in the first quarter. A high snap on the extra point forced Jevonte Alexander to run, and the attempt failed, leaving Carman- Ainsworth down, 7-6.

Again, the Cavs answered with a lengthy drive, but this time they failed to convert a fourth-and-one at the Clarkston 3-yard line. The Wolves used that spark to score the next three touchdowns, on runs of 8, 5 and 8 yards by Eriksen. Carman-Ainsworth contributed another fumble and a turnover on downs at midfield to the rally, as Clarkston took a 39-6 lead with 2:19 left in the half.

The Cavs cut it to 39-14 on Alexander’s 27-yard run and Seales’ two-point conversion with 42 seconds left in the half. But, Clarkston sealed the deal in the third quarter with touchdown runs of 12 and 22 yards by Eriksen. Carman-Ainsworth again helped the Wolves, throwing an interception on a halfback option pass off a reverse.

The Wolves’ 54-14 lead triggered a running clock, but Carman-Ainsworth stopped it on Alexander’s 49-yard run with 11:06 left in the fourth quarter. Clarkston restarted the running clock with its eighth touchdown at 8:39. Tyler Minor scored on a 12-yard run for Carman-Ainsworth at 3:01 to make it 61-26, but the try for a two-point conversion was stopped, and the clock ran out.

Alexander rushed for 200 yards on 18 carries, and Seales had 143 yards on 15 runs. Each team threw the ball just once.

“That’s playoff football in Michigan,” said Williams. “You’ve got to run the football, and you’ve got to stop the run. I thought we ran the ball pretty well, and they ran it excellent. We made some mistakes early that kind of got us behind a little bit. But our kids fought to the end, so I’m proud of them.”