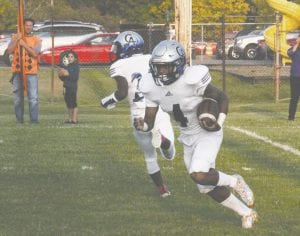 Carman-Ainsworth’s Jakobe’ Blount rushes toward the end zone during a game with Flint Powers on September 15.

FLINT TWP. – The Carman-Ainsworth football team started out hot and never seemed to cool down during its 52-14 win over Bay City John Glenn at home last Friday. The Cavaliers piled on 20 points in the first quarter and another 10 in the second while holding their opponent scoreless for a comfortable 30-0 lead at the half.

John Glenn finally got on the board in the second half with a touchdown in the third quarter to bring the score to 30-7 after Carman-Ainsworth was unable to convert on any of its drives in the quarter. The Cavaliers would make up for the scoreless quarter in the fourth, though, adding 22 more points to their total while only giving up seven more for the 52-14 victory. Individual stats were not reported.

The win moves Carman-Ainsworth to 3-2 on the season prior to Saturday’s huge matchup for supremacy in the Saginaw Valley League’s Blue Division with Bay City Central. Both teams are 3-0 in conference play and 3-2 overall, with the Wolves dropping a close game to Midland last week, 42-35.

Carman-Ainsworth is tied with Midland Dow for most points scored in conference play with 142 and is leagues ahead of the competition with points against, giving up just 14 to conference opponents. Bay City Central is second in that category with just 57 points allowed through its three conference games, but will have all it can handle with the Cavaliers’ potent offense.

The game is slated to kick off Saturday at 1 p.m. at Carman-Ainsworth High School.