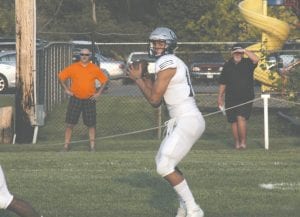 Carman-Ainsworth’s Dustin Fletcher looks to Dwayne Gurley for the first touchdown pass of the game last Friday against Flint Powers.

Carman-Ainsworth opened the game with a touchdown pass from Dustin Fletcher to Dwayne Gurley for the first of many Cavalier touchdowns on the night. No other stats were reported, as phone calls for stats continue to go unanswered.

The win moves Carman-Ainsworth to 2-2 overall, 2-0 Saginaw Valley League Blue, as the Cavalier offense remains potent, outscoring its conference opponents 90-0 through two games. The Cavaliers will face another conference opponent this week in Bay City John Glenn, that sits at 2-2 as well. The Bobcats are coming off a 51-21 loss to Midland Dow, but toppled Saginaw Arthur Hill 41-6 just a week earlier.

The game is scheduled to kick off at 7 p.m. at Carman-Ainsworth.