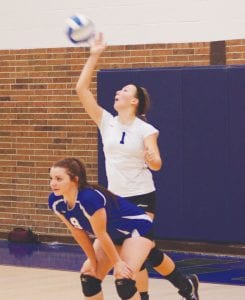 Sarah Thurston (1) was her team’s leader in assists at the Cereal City Invitational this past weekend.

BATTLE CREEK — The Cavaliers went 1-3 at the Cereal City Invitational Saturday. Carman- Ainsworth opened with a 25-17, 25-14 loss to Columbia Central.

“Cereal City is a tough tournament and we beat a very good Delton- Kellogg team in a thrilling three-game battle which was a huge win for us,” coach Barb Hurand said. “It was our first win of the season so it was a great accomplishment to beat a good team to get our first win.

“We were competitive against St. Phil, who is the defending Class D state champs and I believe currently ranked No. 1 in Class D. Our goal is to improve each time we compete and we are definitely making some strides in doing so.” — K.W.