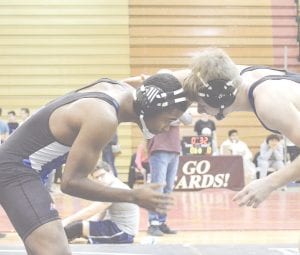 Carman-Ainsworth teammates My’Kah Lewis, left, and Nathan Delong square off against each other at the Genesee County Meet at Davison on Dec. 16.

MONTROSE – The Carman- Ainsworth varsity wrestling team took sixth place in the Holiday Classic Tournament in a field of 12 teams at Montrose High School last Thursday. Carman-Ainsworth went 2-2 in pool play, defeating Bay City Central 39-30 and Bendle 39-30, but lost to Montrose 42-30 and Cros-Lex 66-18. The Cavs then lost to Mt. Morris 54-15 in the elimination round.

The only individual results reported were from the loss against Cros-Lex. Jacob Yost at 140, Dominique Horton at 171 and Jordan Edwards at 189 were the only Cavaliers to win their matches in the dual meet.

Nathan Peterson at 130, Larry Brown Jr. at 135, Jacob Petty at 152, Nathan Delong, Nathan Taylor at 215 and Trevon Bennett at 285 all lost their respective matches against Cros-Lex.

The Cavaliers wrestled against Davison and Midland Dow yesterday after we went to press.

In our Dec. 17 edition, we inadvertently identified two wrestlers as state-qualifiers last season, due to misinformation received from the coaching staff. Carman-Ainsworth had no qualifiers for states.

In our Dec. 21 edition, due to incomplete results from the Genesee County Meet, we incorrectly stated that only two Carman-Ainsworth wrestlers placed in the top six. Jacob Yost at 140, Clifford Boxley Jr. at 125, Nathan Peterson at 130, Dominque Horton at 160 and Jordan Edwards all placed within the top six.