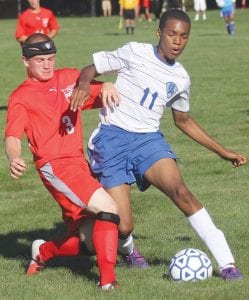 Leon Bell (11) battles for ball possession in a game earlier this season. Bell had both goals in Carman-Ainsworth’s 2-1 victory Monday.

The Cavaliers hadn’t won since October 2010, but snapped that streak when Leon Bell scored two goals and Andrew Ramirez made 20 saves in net to make those scores stand up. Anas Morsi and Terance Green assisted on the goals, both of which came in the second half and wiped out a 1-0 Kearsley halftime lead.

The Cavs improved to 1-4 this season. They were coming off three straight shutout losses and had been outscored, 17-1, in their first four games. But the offense was starting to show some life in recent games.

The Cavs had five shots on goal against Fenton last Thursday but lost, 5-0. A day earlier, they fell to Lapeer West, 4-0.

All five of Carman-Ainsworth’s games so far have been against Metro League teams. But, the Cavs visited Owosso yesterday and will play a Saginaw Valley League crossover game next Wednesday against Midland at home.