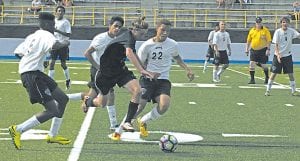 Carman-Ainsworth’s James Avery battles with a Fenton defender for the ball.

The first game for the Cavaliers will take place on Tuesday at 5:30 p.m. at the Saginaw Soccer Complex. Grand Blanc and Davison will do battle on the same day at 6 p.m., as will Swartz Creek and Flushing at 4:30 p.m. Lapeer awaits the winner of Swartz Creek- Flushing for Thursday’s semifinal at 5 p.m. at Grand Blanc. The other semifinal follows at 7 p.m. The district final will be held Saturday at 1 p.m.

Carman-Ainsworth has had a bit of a tough season, but plays just as hard as anyone in the area. The Cavs are led by a core group of seniors including Cheng Yang, Aaron Hopson, Lucas Shoffer, Specer Flewig, Yazeed Abdelhay, Mike Fischer, Zack Lloyd-Amthor, Luther Collins, Hamza Jafari, Kevin Greene, Belal Traini, James Avery, Christian Williams and Khaled Thabet. – B.P.