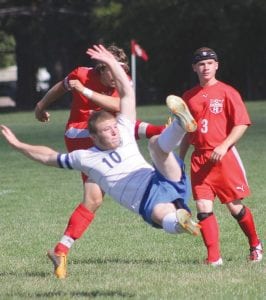 Carman-Ainsworth’s Brett Dortch (10) throws himself in front of a free kick by Swartz Creek’s Jackson Maxwell during Monday’s game.

The Cavaliers bowed to Clio, 5-1, in the season-opener last Friday at home, then fell to Swartz Creek, 3-0, at Carman-Ainsworth this past Monday.

Against Creek, the Cavs managed five shots on goal, two by forward Leon Bell. Andrew Ramirez made two saves in goal for Carman-Ainsworth.

Creek took a 1-0 lead with 18:41 left in the first half on a goal by Trevor Sexton, assisted by Jacob Soto. The Dragons then put it away with two goals in the second half by Jackson Maxwell, at 26:23 and 15:48. Maxwell was assisted by Matt Okenka and David Croft.

Against Clio, Terance Green scored Carman-Ainsworth’s goal, on an assist from Bell.

The Cavaliers visited Lapeer West yesterday and will host Fenton today at 4:30 p.m.