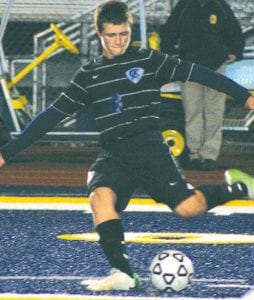 OXFORD — Carman- Ainsworth went down battling in its final soccer game of the season Tuesday night in the Div. 1 loaded district at Oxford.

The Cavaliers got into a shooting match with Oxford and eventually bowed to the Wildcats, 7-2. The loss ended Carman- Ainsworth’s season at 3-16-1.

Terance Green and Austin Yost both scored in the first half, and the Cavs went into halftime trailing, 4-2. Oxford, 9-4-2, put it away with three second-half goals. Andrew Ramirez helped keep Carman-Ainsworth in the game with 17 saves.

Oxford advanced to play Grand Blanc in a semifinal game at 5 p.m. today at Oxford. Grand Blanc eliminated Flushing, 7-1, Tuesday. Clarkston beat Davison, 3-0, in the other bracket Tuesday and will play Lake Orion in the semifinals at 7 p.m. today. The championship final is at 10 a.m. Saturday. 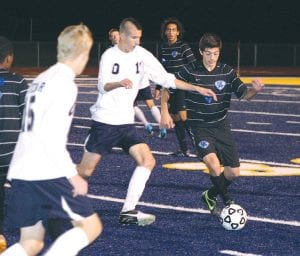 Khaled Zaiter (4) looks to make his move for Carman-Ainsworth against Oxford.