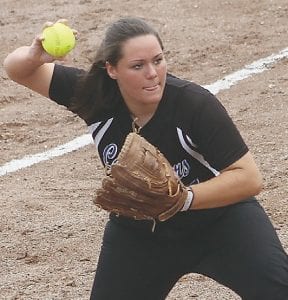 Carman-Ainsworth third baseman Brianna Haskins rears back for a throw to first base.

The Cavaliers managed no hits in the five-inning game, but had four baserunners on walks. Alanna Gleason reached base twice on a walk and a hit by pitch. Madison Cox pitched the distance, and Meghan Borgerding highlighted the defense with an over-the-shoulder catch at shortstop.

Carman-Ainsworth was with- in 4-0 after two innings, but Kearsley pulled away with an eight-run third.

“We had one bad inning and that killed us,” said Cavs coach Joy Roe. “But, we were in it.”

“We had a young team, with a lot of sophomores and three freshmen,” said Roe. “We should have a better team next year because everybody is returning. We’re still missing a lot of simple things, but we have a good foundation for next year.”