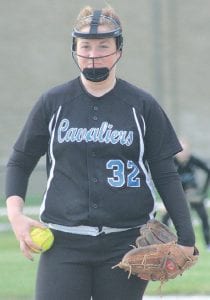 Carman-Ainsworth pitcher Keri Crane looks to her catcher for the sign.

Kamrin Gold and Kelsey Ferguson each had a hit in the opener. Kinterra Tomlin had two hits in the nightcap. Keri Crane took the loss in both games.

Flushing took command in the nightcap with an eight-run second inning, capped by a towering grand slam into the trees behind the left field fence by Caitlyn Hensel.

The Cavaliers dropped a non-league doubleheader at Clarkston last Thursday, 10-0 and 14-0, both in five innings. Katlyn Koegel and Meghan Borgerding each had two hits in each game.

Carman-Ainsworth, 2-18 overall and 0-8 in the league, will travel to Durand today and visits Powers Catholic for another Big Nine twin bill Monday. — D.N.