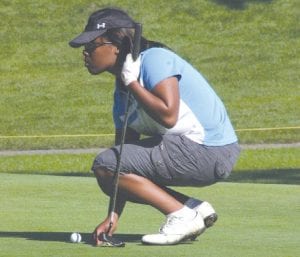 Selena Johnson lined up a putt at a competition earlier this season.

HIGHLAND — Maybe this is the year Meghan Borgerding breaks into the state golf tournament.

The Carman-Ainsworth sophomore has led the Cavaliers the last two years and has scored in the mid-40s this fall. She shot 86 at the Sept. 28 Big Nine Conference tournament, 10 strokes behind the leader.

Borgerding was also 10 strokes off the final individual qualifying spot in last year’s Div. 1 regional, shooting 96 at Prestwick Village Golf Club. The top three teams and top three individuals not on those teams advance to the state meet.

“I think she’s a year away,” Carman coach Bob Blaylock said at the time.

The good news for Borgerding is that she’s a year older, a year more experienced, and she’s playing at the same course in this year’s regional. The Div. 1 tournament was scheduled to start this morning, with Selena Johnson, Taylor Tolbert, Keri Hart and Morgan Genore joining Borgerding in the Carman lineup. 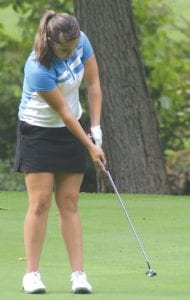 Meghan Borgerding and teammates will play in the regional today.

Carman finished fourth in the Big Nine season, which concluded with last week’s league tournament at Fenton Farms. The Cavs shot 484 as a team on their home course. Flint Powers Catholic won the tournament with 335 and clinched the league title. Davison shot 354 and Flushing 377.

The state meet is Oct. 14-15 at The Meadows on the campus of Grand Valley State University.