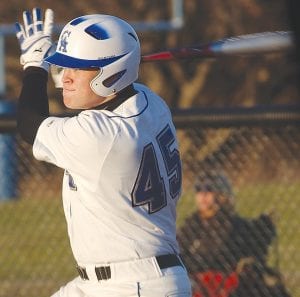 Jacon Yencer (#45) swings for the fences for the Carman-Ainsworth varsity baseball team.

FLINT — Having played just once since the 2011 season was scheduled to begin on March 31, a 7-4, nine inning loss to Linden on April 12, Carman-Ainsworth shook off the cobwebs to split a twin bill at Tri-Valley Conference-East rival Bridgeport on April 21.

Game one started off poorly when Bridgeport first baseman Matt Young blasted a grand slam in the bottom of the second inning to put the Cavaliers down, 7- 1, a deficit that snowballed into an 11-1 five-inning defeat.

In the second contest the Cavaliers came back to vanquish Bridgeport, 9-1, as Brett Dorch and Jamaal Dixon walked away with two hits and two RBI each. With two hits each on the night, juniors Colin Heaton and Jake Weissend were also in the mix, helping to lead a four-run, five-hit fifth inning that gave Carman- Ainsworth an 8-0 advantage. Getting the win for the Cavaliers was newcomer Brennan Gleason, allowing two hits and two walks with six strikeouts in five innings of work.

“In game one you could see the rust from being forced back inside to practice. Brigeport capitalize on any Cavalier mistake’s in the field,” MIller said. “In game two CA freshman pitcher Brennan Gleason was call-up from the JV to start game two and gave the Cavs a much need boost on the mound. Brennan pitched very well and benefited from great play in the field with only two errors in the second game.”

On Tuesday Carman-Ainsworth was slated to start Big Nine action at Powers, but those matchups were rescheduled for May 6 because of field conditions.