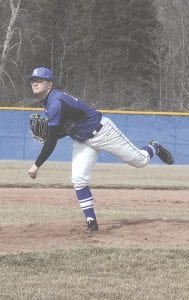 Carman-Ainsworth’s Chase Matusik takes the mound against Kearsley on March 26.

FLINT TWP. — The Cavaliers split a doubleheader against Birch Run last Tuesday, winning 3-2 before losing 5-3. No stats or details were reported. — J.O.