Cavs sputter out of starting gate 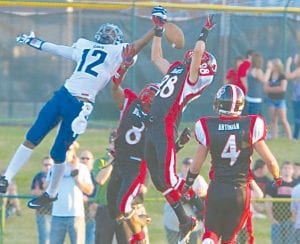 GRAND BLANC
— Carman- Ainsworth led briefly in the second quarter, but struggled to move the ball and eventually bowed to Grand Blanc, 21-7, in the football season opener for both teams last Friday.

The Cavaliers went up, 7-6, on Jesse Johnson’s fumble recovery in the Grand Blanc end zone and Connor Storm’s extra-point kick.

But the Cavs couldn’t score on offense all night, hurting themselves with 10 penalties for 75 yards, including three flags that erased long plays. They also lost two fumbles and two interceptions against their old Big Nine Conference rival.

Grand Blanc took a 6-0 lead in the first quarter on a 17-yard touchdown pass from running back Justice Hayes to quarterback Ryan Morley with just 3:40 elapsed in the game.

Carman-Ainsworth went ahead, 7-6, when Hayes, playing quarterback in the Wildcat formation, fumbled a shotgun snap and Johnson dove on it in the end zone with 6:19 left in the second quarter.

But the lead lasted only 1:22 as Grand Blanc drove downfield and took a 12-7 lead on Nick Koutouzos’ 1-yard run with 4:57 left until intermission.

The Bobcats made it 18-7 just 2-1/2 minutes later on Hayes’ 5-yard touchdown run, and Zach Carroll capped the scoring with a 35-yard field goal with one second left before halftime.

To their credit, the Cavs’ defense shut out the Bobcats in the second half and recovered two Grand Blanc fumbles during the game. Shane Barron had two interceptions.

But they could never get untracked on offense.

Junior quarterback Nick Hill had the best offensive game, hitting 7-of-21 passes for 99 yards and also leading the ground game with 12 carries for 44 yards. Barron added 24 yards on five carries, but Allen Overton was the next highest with seven yards in two totes.

Barron and Calvin Green were the favorite passing targets of Hill. Green caught three passes for 53 yards, and Barron hauled in three aerials for 44 yards.

The Cavaliers will play their home opener at 7 p.m. today against Warren De La Salle.