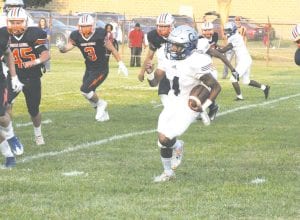 Carman-Ainsworth’s Jakobe’ Blount heads for the sideline during a game with Flint Powers on September 15.

SAGINAW – The Carman- Ainsworth football team narrowly escaped Saginaw Heritage with a win, defeating the now 2-5 Hawks 38-35 on the road last Friday. The win moved the Cavaliers to 5-0 in league play and 5-2 overall. Game stats and individual player stats were not reported.

Carman-Ainsworth hosts Midland Dow tomorrow for its final home game of the season. Midland Dow is currently second behind the Cavs in the Saginaw Valley League’s Blue Division at 4-1 and is coming off a 55-20 victory over Saginaw Arthur Hill last week.

It will be a clash of two different powers, as the Chargers have allowed the least amount of points in the entire SVL this season with 90, while the Cavs have scored the second-most points in the entire SVL with 280. With a win this week, Carman- Ainsworth would punch its ticket to the playoffs as teams are guaranteed a postseason berth with six wins.

The game is scheduled to kick off tomorrow at 7 p.m. at Carman- Ainsworth Jr. High.