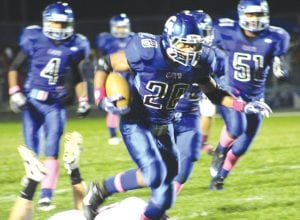 Gerald Holmes stepped over a Davison player on a 25-yard touchdown run in the second quarter.

The Cavaliers built a 24-point lead in the first three quarters, then held off a Davison rally over the last 13 minutes to eke out a 31- 28 victory on homecoming night at Carman- Ainsworth Junior High.

Shane Barron scored two touchdowns and rushed for 137 yards on 13 carries, as Carman finished at 5-1 in the Big Nine to claim the league’s final football championship. The four Big Nine schools will join the Saginaw Valley League next year. The Cavs are 5-3 overall and must win at Ann Arbor Huron this Friday to get into the playoffs.

Davison opened the game with an onside kick and appeared to gain possession when Logan Richards grabbed the ball in the air. But the ball apparently didn’t go the required 10 yards and Carman took possession at midfield.

The Cavs cashed it in with a 26-yard touchdown run by Barron and the first of four Connor Storms extra points for a 7-0 lead just 3:08 into the game. It was the first of four touchdowns Carman would score in the opening 17 minutes.

Still in the first period, Barron reversed his field after getting jammed at the line and ran around left end for a 70-yard score to make it 14-0 with 3:18 to go.

Davison gambled on fourth down at its own 28 and Carman stuffed it to set up Gerald Holmes’ 25-yard touchdown run on the first play of the second quarter. The Cavs upped it to 28-0 when a Davison fumble set them up at the 19 and Lorenzo Redmond cashed it in six plays later with a one-yard run with 7:25 left in the half.

That was enough time for Davison to drive 70 yards and score on Tyler Macsuga’s oneyard run at the 2:27 mark. Zac Brammer’s kick made it 28-7 at halftime.

Carman recovered a fumble in the first minute of the second half and converted it into a 38-yard field goal by Storms and a 31-7 command with 6:48 left in the third quarter.

Davison started its comeback with a 77- yard drive capped by Macsuga’s one-yard dive on fourth-and-goal with 26 seconds left in the third quarter. Brammer ran in the twopoint conversion to make it 31-15.

This time, Davison covered the onside kick at the Carman 43 and scored on a 15-yard run by Gabriel Hodge just 30 seconds into the fourth quarter. A run for two failed, leaving Carman up, 31-21.

The Cardinals forced a punt and took over at their 20 with 6:59 left. Maverick Prine converted a fourth-and-3 on the 80-yard drive and scored on a one-yard run with 2:16 left. Brammer’s PAT made it 31-28, but the Cards didn’t get the ball back until the final four seconds at midfield and couldn’t score.