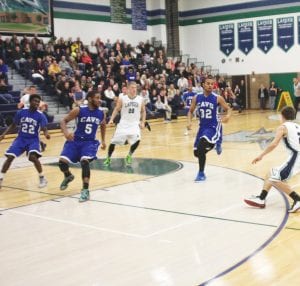 Carman-Ainsworth played three of its first four games this season on the road, including this Dec. 12 contest at Lapeer, where good defense by Josh Jackson (22), Jaylen Bradley (5) and Isaac Gillum (32) helped the Cavaliers to a 33-32 win. The Cavs were back home this week for Tuesday night’s game against Swartz Creek and Friday’s game against Saginaw.

FLINT TWP. – Carman-Ainsworth shook off a 19-day Christmas break and hit the floor running against Swartz Creek on Tuesday night, beating the Dragons 59-47 in a non-league boys’ basketball game at Carman-Ainsworth.

The Cavaliers stormed out to a 17-5 lead in the first quarter and weathered a Creek rally in the second quarter to trail 24-22 at halftime. Carman-Ainsworth tied it 36-36 with a 14-12 third quarter, then pulled away with a 23-11 explosion in the final eight minutes.