Cavs stifle Chemics but fall to 3-3 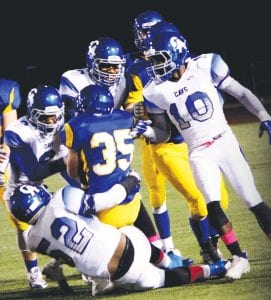 MIDLAND – Carman-Ainsworth held the state’s fifth-ranked Div. 2 team to one touchdown on offense but couldn’t reach the end zone itself in a 14-3 loss to Midland last Friday.

The Cavaliers trailed just 7-3 at halftime, thanks to a stingy defense and Belal Khoulani’s second-quarter field goal. They kept it that way until the fourth quarter, when Midland tacked on another touchdown to seal the win, clinch a playoff berth at 6-0 and remain in a first-place tie in the Saginaw Valley Conference-Red Division at 4-0.

Carman-Ainsworth slipped to 2-2 in the league, all but dashing its title hopes, and 3-3 overall, putting itself in a must-win situation for a playoff berth.

Josh Jackson hit 11-of-16 passes for 120 yards, and Jalen Lewis ran for 95 yards on 13 carries, but the Cavs totaled only 211 yards of offense. Logan Banister caught nine of Jackson’s passes for 100 yards.

Jaylen Bradley had seven tackles and a sack to lead the defense, and Romeo Evans had six tackles. Banister and Cahlil Brownlee each had an interception as the Cavs held Midland to 129 yards of offense and four first downs. The Chemics had been averaging 43 points a game coming in.

After a scoreless first quarter, Carman- Ainsworth took a 3-0 lead on Khoulani’s 36-yard field goal with 7:55 left in the second period. Six minutes later, Midland took the lead for good with a 43-yard fumble return for a touchdown with 2:01 left in the half. After a scoreless third quarter, the Chemics put it away with their only offensive score, a 21-yard touchdown pass with 7:08 left in the game.

Carman-Ainsworth will play its homecoming Friday against Bay City Central.