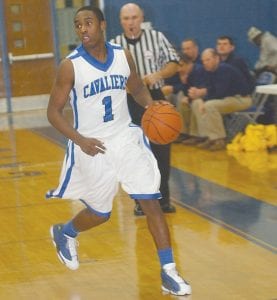 Carman-Ainsworth’s Denzell Watts (#1) dribbles the ball up the court.

Justin Person led Carman with 14 points, while Denzel Watts added 11 in the loss.

“Clarkston hit 12 three’s for the game and I believe it’s the first time a Carman- Ainsworth boys’ basketball team got mercied.” said Carman coach Bob Root. “(We) played at the intensity level of a junior varsity team and Clarkston is a top-20 team in the state.”

Cameron Morse and Jaylen Randle led the offense with 14 points each, while Person added 12. The Cavs made 10 three-point field goals for the game, but did not attempt a free throw.

“Howell’s front line was 6-foot-10, 6-foot-7 and 6-foot-4,” Root said. “(That) made it difficult to score inside against their 2-3 zone. Our kids competed well, but made a few costly turnovers towards the end of the game.”