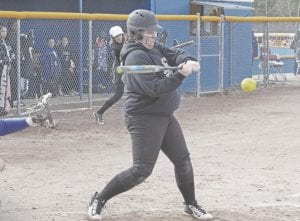 SAGINAW – The Carman-Ainsworth softball team got its most dominant wins of the season thus far, 17-1 and 23-6, against Saginaw Arthur Hill last Thursday.

Morgan Sherrer, Kloelyn Shann and Mykala Brooks each had two hits and with one apiece were Jada Black, Hannah Thurston, Tiara Jefferies and Sydney Johnson.

Makayla McDaniels paced the offense in game two with two hits, while Sherrer and Kayli Holbrook each had three. Black picked up a pair of hits, while Erin Gross and Abbi Pelky each had a hit.

Sherrer led the team offensively with two hits, while Rayanne Leach and Cherry-Smoots-Hoyle each added one hit. The outfield was quite active, as Sherrer and Smoots-Hoyle made three catches apiece and McDaniels had two.

Sherrer and McDaniels each racked up a trio of hits in the nightcap and Smoots-Hoyle had two. Jefferies and Shann both added hits. Sherrer made four catches, one of which was “a shoestring catch on the run” according to Carman-Ainsworth coach Joy Roe. – B.P.