Cavs storm back into football playoffs 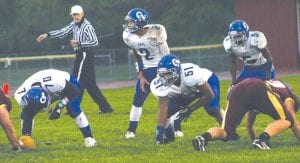 Shane Barron (2) and the Cavaliers have earned the right to line up at least one more week this football season.

ANN ARBOR — The state high school football playoffs begin this weekend, but Carman-Ainsworth has been in playoff mode for two weeks already.

The Cavaliers had to win their last two games of the regular season to clinch their first postseason berth since 2006. They accomplished that with a 31-28 victory over Davison on Oct. 14 and a 38-7 romp at Ann Arbor Huron last Friday that left them at 6-3.

Carman will hit the road for its Div. 1 pre-district game, visiting sixth-ranked Midland at 7 p.m. Friday.

The Cavaliers didn’t waste any time at Huron, getting two long touchdown runs from Shane Barron early in the game to take control. Gerald Holmes and Lorenzo Redmond also scored touchdown runs, and Brandon Lenoir made a fine, back-ofthe end-zone catch for Carman’s fifth touchdown. The defense took care of the rest.

“ The defense set the tone early,” said Carman coach Nate Williams. “ They flew around. Shane broke it open early with two quick touchdowns and we just kind of went from there. Everybody played goodcaliber football.

The defense, including Evan Wilson (52), Rummeal Branch (tackling the runner) and Brandon Lenoir (1), has been flying to the ball all season.

“It was a playoff game for us. We felt the Davison and Ann Arbor Huron games were playoffs for us, so it was good to see the guys respond and keep on fighting.”

The Cavaliers accomplished two of their goals in the final two weeks, clinching the Big Nine Conference championship outright with the homecoming win over Davison and getting into the playoffs with the victory at Huron.

“It’s a huge accomplishment, because this team has never been in the playoffs,” said Williams. “One of the goals these guys made at the start of the season was to make sure the seniors leave here as champions and in the playoffs.”

The Cavs have their work cut out for them at Midland. The Chemics are 8-1 and were runners-up in the Saginaw Valley Conference. They have outscored opponents 352-70 this year, an average of 39-8 per week.

“Midland is a good team,” said Williams. “ They’re fundamentally sound, they’re big up front and they’ve been in the playoffs year after year.”

The Chemics are making their 10th straight postseason appearance and 13th in the last 14 years. The winner will play the winner of the Grand Blanc-Holt game.