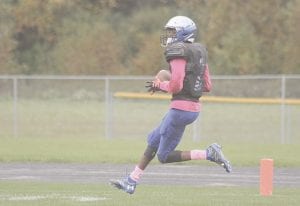 Trent Barron of Carman-Ainsworth strides into the end zone during Saturday’s loss to Lapeer. Photo by Joe Oster

FLINT TWP. – The Carman- Ainsworth football team held the lead right up to the final minute before falling 31-28 to undefeated Lapeer last Saturday.

The opening quarter saw Lapeer strike first on a seven-yard touchdown pass from Brady Apple to Drew Johnston for a 7-0 lead with 5:39 remaining. Carman- Ainsworth responded at the 3:12 mark in the first on a completed pass from Dustin Fletcher to Trent Barron for 62 yards to even the score headed into the second. The second quarter saw a defensive battle from both sides until the final minute when Fletcher scored on a one-yard scamper to put the Cavs ahead 14-7 headed into the half.

Lapeer evened the score once again early in the final frame, scoring on a 10-yard rush from Brandon Pretty for a 21-21 tie with 11:52 remaining. At the 4:30 mark, Fletcher found Barron for a 19-yard touchdown pass for a 28-21 lead. Lapeer answered back by scoring on a 17-yard pass from Apple to Johnston to tie the game with just 38 seconds remaining, then, on the ensuing drive, Fletcher was picked off to set up a 49-yard game-winning field goal from Lapeer’s Cody Fick to close out the afternoon.

Fletcher was 21-of-34 passing for 346 yards and three touchdowns, while also leading the team in rushing with 50 yards on 14 carries. Keshawn Keyes added 16 yards on eight carries. Barron led all receivers with 10 catches for 175 yards. Bray had four catches for 96 yards, Mike Fletcher caught four passes for 45 yards and Jakobe Blount had two catches for 26 yards. Tanayshio Dones led the Cavs’ defense with six solo tackles, 11 assists and 1.5 sacks. Ronnie Pompey had three solo tackles and four assists and Aaviyon Levertte had eight assists.