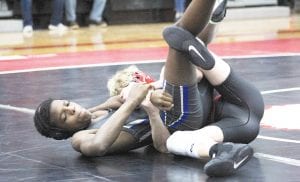 Jabril Muhammad of Carman-Ainsworth works against a Grand Blanc opponent during a meet at Grand Blanc on December 18. Photo by Joe Oster

FLINT TWP. – The Carman- Ainsworth wrestling team competed in a tri-meet against Lake Odessa Lakewood and Fowlerville last Wednesday, losing 63-9 to Lakewood and 78-6 to Fowlerville.

Against Fowlerville, only Brown was able to get a win, defeating his opponent by fall at 1:37. Kumar, Morgan, Muhammad, Robinson and David Mathis, at 189, all lost by fall. Fowlerville also won by forfeit in the remaining matches.

The Cavs were also slated to compete in the Beecher Individual Tournament last weekend, but the event was canceled due to the poor weather conditions. Flint Carman-Ainsworth is at a Saginaw Valley League meet at Davison tonight at 6 p.m.