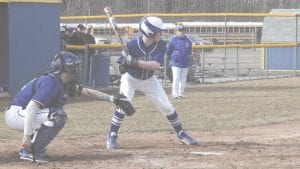 SAGINAW – The Carman- Ainsworth baseball team opened the season with a pair of losses against Saginaw Heritage. The Cavaliers lost the first game 4-1 and dropped the nightcap 11-8.

Carman-Ainsworth took a 1-0 lead in the first inning of the early game. Saginaw Heritage drove in four runs in the fifth to take the win. Harrison Hogan tossed five innings, striking out seven while allowing three hits and four runs. Sean Jerome gave up two hits in one inning. Hogan also had Carman-Ainsworth’s only hit of the game.

In the night cap, Saginaw Heritage took a 2-1 lead in the first. Carman-Ainsworth scored six runs in the third for a 7-2 lead, but Saginaw Heritage scored one in the fourth and eight in the sixth. The last run for the Cavaliers was in the seventh.

Carman-Ainsworth, 0-2, was at Swartz Creek on Wednesday following press deadlines and will play Clio in the first round of the Greater Flint Tournament on Friday.