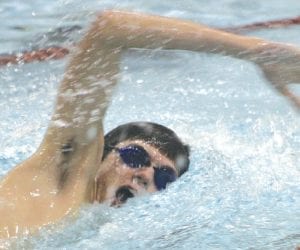 Evan Snyder works his way across the pool for Carman-Ainsworth.

Pangerl was seventh in the 100 backstroke in 1:05.08. He and Sharp both swam on the 200 medley relay team that placed fifth in 1:52.99. Blake McDonald and Seandre Harris-Salaam also swam that relay.

Zak Wilkins also medaled, placing seventh in the 100 breaststroke in 1:12.40.