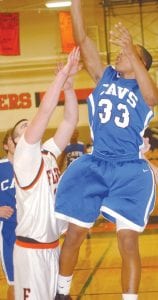 Sophomore forward Gerald Holmes takes a shot for the Cavaliers against Flushing.

SAGINAW — Carman-Ainsworth continued its smooth sailing through the basketball season early this week, but the Cavaliers were headed for some stormy waters last night.

Carman cruised past Owosso, 52-38, in the Class A district tournament opener Monday — this on the heels of a 60- 37 rout of Brandon in last Thursday’s regular-season finale. The Cavs (17-4) hadn’t lost a game since Jan. 25 and took a 10-game winning streak into last night’s district semifinal against host Saginaw.

That’s where the win streak fell into jeopardy, as Saginaw came in as the No. 3-ranked team in the final Associated Press poll this week with a 17-3 record of its own.

Carman, an honorable mention team in the poll, hadn’t been challenged since a fivepoint win over Flint Powers Catholic on Feb. 11, and Brandon was no match in a nonleague game last week. The Cavs jumped out to an 18-7 lead in the first quarter and stretched it to 36-18 by halftime with an 18-11 second period. An 11-5 third quarter made it 47-23, rendering Brandon’s 14-13 fourth quarter irrelevant. 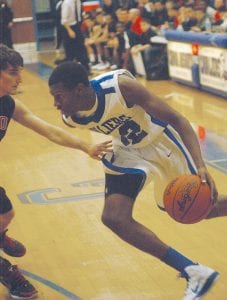 Carman hit the floor running in the district opener, streaking to a 15-6 lead over Owosso in the first quarter. The teams played to a 14-14 tie in the second period, leaving Carman ahead, 29-20, at halftime. But the Cavs put some more distance between themselves and the Trojans with an 11-7 third quarter, making the score 40-27 heading into the final eight minutes.

Watts led the way in this one with 26 points. Desmond Morris scored six, and Hill, Wilson and Cameron Morse added five apiece.

In the other half of the district brackets, Saginaw Arthur Hill crushed Flushing, 80-53, and moved on to play Flint Northern in Wednesday’s other semifinal. The winners advanced to play for the district title at 6 p.m. Friday.