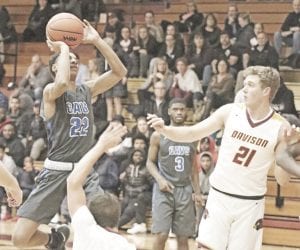 The Cavaliers jumped to a 19-14 lead after the first quarter, but saw their lead shrink to 22-20 by halftime. Jayden Nunn, one of Carman-Ainsworth’s most dangerous offensive threats, was held scoreless for the entire first half.

“Our half-court defense played really well in the first half and prevented Carman Ainsworth from getting into any type of rhythm early on,” said Davison coach Robert Hatten.

The Cavs were able to right the ship in the second half, taking a 38-26 lead into the fourth and outscoring the Cardinals 15-8 in the final frame..

“However, in the third quarter we simply had too many turnovers that led to easy baskets for Carman Ainsworth, as they extended their lead to 12 heading into the final quarter,” said Hatten. “In the fourth quarter, we were able to get back to getting some quality looks at the basket, but our shots just weren’t falling.”