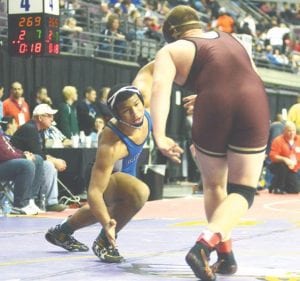 Carman-Ainsworth’s Jerron Thomas shoots on Davison’s Jake Ellis in a 215-pound match Friday at The Palace.

AUBURN HILLS – Jerron Thomas made it to the podium this year in the Div. 1 state wrestling finals and kept alive a Carman-Ainsworth streak in the process.

Thomas placed eighth in the 215-pound weight class at The Palace of Auburn Hills, grabbing the final medal spot and giving Carman-Ainsworth a state placer for the fourth straight year.

Two other Cavaliers also wrestled in the state finals last Thursday-Saturday. Darien Vaughn competed at 130 and Milik Dawkins at 145, with both going 1-2.

Thomas had reached the state finals last year at heavyweight but lost his first two bouts. He dropped down to 215 this year and won a district title before finishing second in the regional.

At The Palace, Thomas started with a 9-7 victory on Thursday, but lost an 8-3 decision in his first match Friday. Needing a win to stay alive, he beat Davison’s Jake Ellis 7-2 to assure himself a medal. He lost a 10-6 decision to fall into the seventh-eighth-place final, where he dropped a wild, 18-14 decision. He closed his senior year at 41-10.

Vaughn pinned his first opponent in 3:35, then lost via fall in his next match and was ousted by a major decision. He closed his junior season at 31-11.

Dawkins also won his first bout, by an 8-0 major decision, but lost to eventual runner-up Alec Pantaleo of Plymouth Canton and was eliminated by an 8-6 decision in the consolation bracket. Dawkins ended his junior year at 36-7.