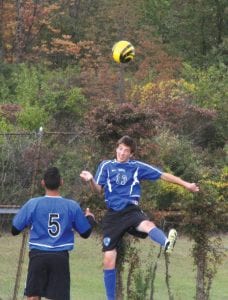 CLARKSTON — Carman-Ainsworth couldn’t have drawn a much tougher opponent in the first round of the district soccer tournament this week.

The Cavaliers were paired up with Clarkston, an honorable mention team in the state coaches’ poll, and the host Wolves ran off with an expected 6-0 victory Monday in the opener of the Div. 1 district hosted by Davison.

Clarkston, 11-5-3, scored three goals in each half to advance to Wednesday’s semifinals against Swartz Creek. The Dragons beat Davison, 2-1.

The only worse assignment Carman- Ainsworth might have received was a game against fourth-ranked Grand Blanc, which blasted Waterford Kettering, 6-0, in the other bracket and played Flushing in Wednesday’s other semifinal. Flushing ousted Waterford Mott, 4-1. The semifinal winners will meet at noon Saturday for the title.

Carman-Ainsworth threw two goaltenders against Clarkston, which put 23 shots on goal. Andrew Ramirez made 10 saves and Tyler Springer had seven. The Cavaliers struggled to mount an offense and finished the season with a 5-15-1 record. They were 2-2-1 in the Saginaw Valley Conference-South Division.