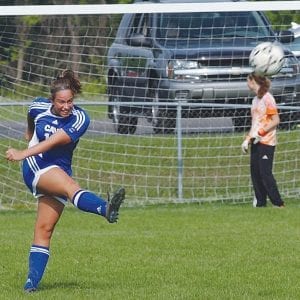 Carman-Ainsworth’s Kaylee VanFleet (#14) knocks the ball down the field.

Jasmine Jones got the scoring started in the first half that gave the Cavs a 1-0 halftime lead. Davison’s Brittney Groulx scored in the second half and neither team could break the tie.

Last Friday, the Cavs traveled to Swartz Creek during Senior Night and ended up on the wrong side of a 3-1 decision. The Dragons opened the scoring early in the first half and tallied three in the half to lead 3-0 at the half. The Cavs scored one goal in the second half, but could get no closer.

The Cavs will open district play on May 31 when they host Saginaw Heritage, the favorite. They are participating in district No. 15-1 at Grand Blanc. The winner will face the winner of the Swartz Creek and Flushing matchup on June 2 at 3 p.m.

The other side of the bracket features Davison versus Grand Blanc with the winner facing Flint Northern. The finals are on June 4 at 10 a.m.

“Saginaw Heritage is one of the highest quality teams in the area.” said Carman coach Jessyca Mathews. “We look forward to the challenge and will play to the best of our potential. We are excited to be playing a new team in the first round of districts. It will be the first time in weeks where we have some of our key members back. One key member, freshman Alexis Thurber, who just had surgery for a massive tumor, has been cleared to return and we couldn’t be happier for her.”