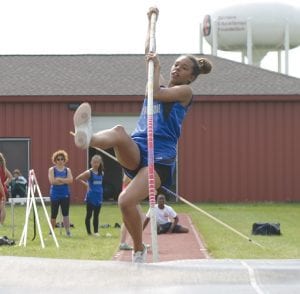 Carman-Ainsworth’s Diamond Scales competes in the pole vault in a meet at Davison last season.

SAGINAW — The Carman- Ainsworth track and field teams showed why they’re perennially one of the state’s best squads after an impressive performance at the Saginaw Valley State indoor meet on March 20. Several of the Cavaliers’ boys and girls placed high in their first competition of the young season.

Randy Richardson took first for the Lady Cavs in the 400-meters in 71.54, while the 4×400 relay team of Richardson, Ashley Hall, Dena Manns and Harmony Williams placed second in 4:40.90. Tori Harding secured the top spot in the shotput with 25-feet, 11.5-inches, as she was followed in second by teammate Maria Overton, who tossed 25-feet, 11-inches.

Nariyel Purches was second in the high jump, leaping 4-feet, 8-inches, while Diamond Scales pole vaulted her way to the top spot with a 7-foot, 6- inch vault. Angel Proby was the victor in the long jump with 16-feet, 4-inches and Kayla Tigner took second with 12- feet, 4.75-inches.

The Cavaliers capped off the day with a dominant effort in the long jump, taking the top two spots. Tyler Minor placed first with a jump of 21-feet, 2.75-inches, followed by Kiyon Bush in second with 18-feet, 9.25-inches.