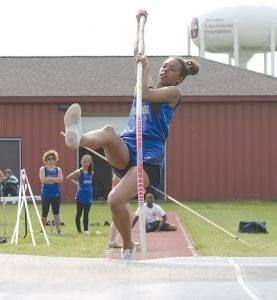 Diamond Scales goes up and over during a pole vault attempt.

FLINT TOWNSHIP— Often regarded as one of the top track schools in the state, the Carman- Ainsworth Cavaliers are looking to make another deep run, and likely another appearance at the state meet. The Cavs will be competing at regional No. 10-1 at Bay City Western. Other teams competing include the host Warriors, Alpena, Bay City Central, Clio, Davison, Flint Northern, Flushing, Midland, Midland Dow, Saginaw Arthur Hill, Saginaw Heritage, Traverse City Central and Traverse City West.

There is definitely a high-level of talent at this particular regional, but the Cavaliers have plenty of talent to counteract what other teams may have to offer. The Lady Cavs expect big things of seniors Jalesia Johnson and Lariah Simpson, who both just signed with Siena Heights and Indiana Tech, respectively. Italia Daniels has also had a big impact on the team this year, and Denisha Gates always puts forth top tier performances.

Carman-Ainsworth’s 4×100 relay team of Daniels, Gates, Lauren Riley and Ashley Hall have had a big impact on the team’s success thus far, as well as the 4×200 team of Simpson, Johnson, Daniels and Hall. Angel Proby is sure to leave her mark in he high jump and long jump,

The boys’ squad also has several key components they can depend on, including sprinters such as Demarion Allen, Tyler Minor, and Gerald Holmes, who have held down the fort all year. Bryant Hudson and Willie Bradford will be looked upon for their ability in the hurdles, and much is expected out of the 4×100 relay team of Allen, Holmes, Minor, and Javonte Alexander.

The biggest name for the boys’ team, however, is Myles Overton. Overton is a star in the shot put and discus, and has been one of, if not the top thrower in the state. At the Cardinal Twilight Classic last week, he placed first in both events, throwing 52- feet, 2.5-inches in the shot put, and 131-feet, 6-inches in the discus.