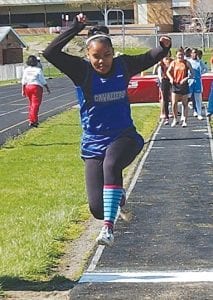 The Carman-Ainsworth boys’ track and field team looks to be in pretty good shape as we head into regionals. Freshman Kiyon Bush has really been pulling his own weight, as he is one of their best sprinters. Robert Young is leading the way in the hurdles, while Cameron Marsh is having a nice season as a pole vaulter. After winning the Big Nine last year, the Cavs still have some expectations to live up to. Not to mention, they finished second at regionals, and 12th overall in the state. When asked in the pre-season preview about how they intended to finish, coach Kenn Domerese said: “Hopefully we’ll be in the top ten (in the state). That’s what we aim for every year.”

The girls’ squad has found some success in the long jump, led by Ashley Hall and Devin Willis. Their relay teams are solid overall, with big contributions from Taylor Clark and Tasaia Thompson. The 110 and 300 hurdles are also a big part of the Cavaliers success. Led by Brandi Rimmer and Kelena Rowe, the Cavs have a tough team to match up against.