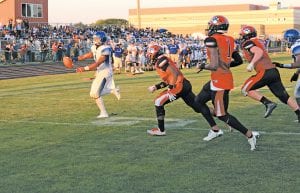 Carman-Ainsworth’s Troy Brown (1) scores a touchdown against Grand Blanc in week one. He was the leading receiver with seven catches for 87 yards against Saginaw Heritage last Friday.

FLINT — Carman Ainsworth aired it out last Saturday, trouncing visiting Saginaw Heritage, 48-21, to set up a Friday showdown at Midland Dow that will determine the outright league champion in the Saginaw Valley League–Red.

Freshman quarterback Dustin Fletcher passed for 280 yards and four touchdowns in a weather-delayed conference contest last Saturday. Fletcher also ran for a team-high 58 yards and an additional score. The game, originally slated for Friday, was set back one day due to weather conditions.

The Cavaliers scored a pair of TD’s in the opening stanza on a 21-yard run by Jalen Smith and on a 30-yard pass from Fletcher to Trent Barron. Heritage cut the deficit to 14-7 at the beginning of the second quarter, but Carman- Ainsworth scored three times in the same period to carry a 34-14 advantage into halftime.

Fletcher connected with Dewayne Gurley for a 26-yard strike with 7:58 left in the second to make it 21-7. After a Heritage score narrowed the gap to 21-14, the Cavs scored twice within the final two minutes of the half to pull away. Fletcher ran to pay dirt from 30 yards away and Lequine Jarrett plunged in from a yard out to send the visitors into intermission with a comfortable cushion.

Fletcher passed to Barron for 34 yards and six points in the third quarter and then hooked up with Marreon Givens for a 16-yard strike in the fourth. Heritage scored an inconsequential TD late in the game to complete the scoring for the day.

Fletcher finished with 17-of-25 passing and Smith completed his only pass of the day for a 20-yard gain.

Troy Brown was the leading receiver with seven catches for 87 yards. Marshall Brooks hauled in four aerials for 81 yards and Barron grabbed a pair of TD passes covering a total of 64 yards. Gurley had two receptions for a TD and 26 yards while Givens had his touchdown catch for 16 yards.

Carman-Ainsworth finished the day with 418 total yards while holding Heritage to 228 yards of offense.

With the win, Carman-Ainsworth notches its fourth straight win, improving to 5-2 overall. Perhaps more importantly, the Cavaliers stand at 5-0 in league play heading into their first-place showdown at Midland Dow tomorrow. Dow is also 5-0 in the SVL-Red and a perfect 7-0 overall.