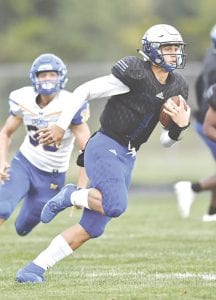 FLINT – The Carman-Ainsworth football team remains winless on the young season, as Midland blew out the Cavaliers 45-0 last Friday.

The Chemics jumped out to a 9-0 lead in the opening quarter after Drew Johnson’s three-yard touchdown run and Carter Thomas’ safety. Midland virtually eliminated any chance for a Carman-Ainsworth comeback in the second quarter, rattling off 27 unanswered points. Chemics quarterback Al Money threw for three touchdowns, a 40-yarder to Tommy Johnstone, a 37-yarder to Eli Gordon and a 24-yarder to Bryce Albrecht. The other score in the quarter was a nineyard rushing touchdown by Johnson.

The only points in the second half were a one-yard touchdown run by Johnson and a safety by Paul Volesky.

The Cavaliers were never a threat to score, gaining only 19 yards of total offense to Midland’s 348.