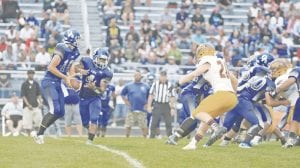 Seemingly everyone joined in on the fun for the Cavs as 10 different Cavaliers carried the football during a dominant display of ground power and freshman quarterback Dustin Fletcher passed for 129 yards.

The Cavaliers also got the job done on defense as they yielded a lone touchdown to the Wildcats in the first quarter and allowed only 48 total yards of offense to Northwestern.

Dustin Fletcher completed 9-of-13 passes and Troy Brown connected on one of his two aerials as the Cavs gained 143 yards through the air. Meanwhile, Carman-Ainsworth churned out 275 yards on the ground, led by Dustin Fletcher’s 78 yards on seven carries.

Byron Gates ran for 54 yards and a pair of touchdowns, Troy Brown gained 33 yards on two tries, Marshall Brooks ran for 27 yards on five attempts and Dewayne Gurley added a run worth 21 yards. Five other Cavaliers also toted the pigskin, gaining anywhere from 6 to 16 yards each. 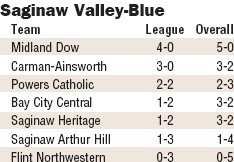 Dustin Fletcher’s favorite receiver was Marreon Givens, who snared three passes for 51 yards. Six other Cavs caught one pass each.

Keondre Toins put Carman Ainsworth on the board first with his two-yard run less than two minutes into the contest and Troy Brown scored on a pass interception that upped the score to 14-0. After Northwestern’s only score of the night, Gates scooted in from seven yards out to help the Cavs to a 19-6 lead at the end of the first quarter.

Carman-Ainsworth went on to score two touchdowns in each of the following three quarters, putting the running clock mercy rule into effect for the entire fourth quarter.