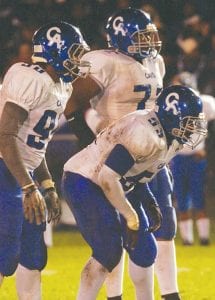 FLUSHING
— Carman- Ainsworth did unto Flushing last Friday what the Raiders did unto the Cavaliers earlier this season.

Three weeks after absorbing a 28-point beating at home, Carman-Ainsworth turned the tables on the Raiders and pounded out a 35-13 Big Nine Conference victory at Flushing.

Shane Barron ran for 112 yards and a touchdown on 12 carries, and Gerald Holmes carried 16 times for 59 yards and two touchdowns as the Cavs improved to 2-4 overall and 2-2 in the league.

It was a complete reversal from the first meeting, when Flushing jumped out to a 21-0 lead and pulled away late for a 41-13 win. This time it was the Cavs going ahead, 21-0, then squashing a late Raiders comeback bid with a final touchdown.

“I think we’re steadily getting better,” said Carman-Ainsworth coach Nate Williams. “Some kids are definitely growing up before our eyes and playing the game the way it’s supposed to be played. If you go back to our first few games, we didn’t execute very well. I took it at about 15-percent execution. We had more dropped passes than catches, and more penalties. Guys are taking ownership in their responsibility now.”

It was Flushing that had the execution problems this time, losing two of three fumbles and throwing an interception. The Raiders also had a punt blocked in the endzone for a Carman- Ainsworth touchdown.

The Cavs opened the scoring at 7:23 of the first quarter on Holmes’ 9-yard touchdown run and Connor Storm’s point-after kick.

They made it 14-0 minutes later when Chris McKay blocked a punt in the endzone and fell on it for a touchdown with 4:08 left in the period.

Barron made it 21-0 with his 53-yard touchdown run down the right sideline with 8:22 left in the second quarter. Flushing then scored on a 23-yard pass to pull within 21-7 at halftime.

Carman-Ainsworth pulled away again at 8:43 of the third quarter when Allen Overton threw a 30-yard touchdown pass to Robert Young for a 28-7 lead.

Flushing scored in the fourth quarter on another touchdown pass to make it 28-13, but the Cavs iced it with Holmes’ 5-yard TD run and Storm’s fourth PAT. Nick Hill had the other extra point.

The Cavs totaled 325 yards to Flushing’s 209. Overton hit 11 of 20 passes for 157 yards, including four to Hill for 64 yards. Five other receivers caught passes.

Chris Thompson and Domenic Doak each had eight tackles, while Barron, Brandon Lenoir, Chad Coleman and James Madison had six each.

“The guys have been motivated since the win with Powers,” said Williams. “We were pretty close in the Davison game, too, but didn’t get over the top. They’ve been working hard in practice and paying attention to details and what the coaches are saying. Our goal is to win the next three games.”

The Cavs will host Flint Powers at 7 p.m. Friday.