Cavs unable to keep up with Davison 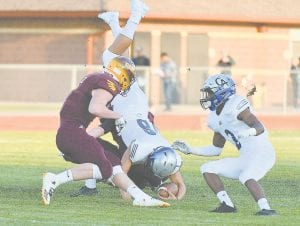 Carman-Ainsworth’s Dustin Fletcher dives for a first down during last week’s game at Davison.

DAVISON – The Carman-Ainsworth football team found itself facing an overwhelming opponent in Davison last week, losing on the road 50-13. Davison struck first to lead 7-0 after a 55-yard run from its quarterback Cannon Hall, but Carman-Ainsworth responded after Dustin Fletcher connected with De’Shawn Gibson for a 52-yard touchdown pass to even the score. From then on, it was all Davison as the Cardinals pulled away to lead 20-7 after the first. Davison then added on eight more points to its total to lead 28-7 at the half.

In the third, the Cardinals widened the gap, scoring 15 more points to lead 43-7 entering the final frame. The Cavaliers responded with six points in the fourth, their first since the opening quarter, thanks to a 16-yard connection between Fletcher and Malik-Bashir Cager with 7:35 to go in the game. Carman-Ainsworth went for two to close the deficit, but was stopped short on the goal line. The Cardinals responded three minutes later with a touchdown to put the game away.