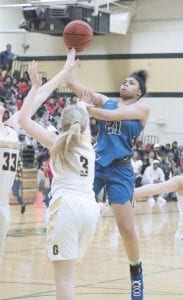 The Cavs, trailing 11-0, could only watch as Goodrich’s Maddie Voelker scored the first eight points, also reaching her 1,000th career point. Voelker finished with 19 points on the night. Goodrich led 11-2 after the first quarter, but the Cavaliers rebounded to trim the lead to 15-13 by halftime, still trailing by two. The Cavaliers tightened up on defense and used several takeaways to score points in the second half outscoring Goodrich 19-9 in the third. The Cavs scored 16 in the fourth to Goodrich’s 15.

Aaliyah McQueen reached double digits for the Cavs with 11 points and junior Jessiana Aaron continues to come into her own, finishing the night with 19 points off of several key steals and crucial baskets.