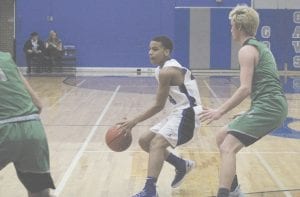 Most of the damage was dealt in the first quarter, as the Cavaliers jumped out to a 15-3 lead. Fenton battled back in the second, cutting the score to 30-16 by halftime.

Carman-Ainsworth cruised to victory in the second half, outscoring the Tigers 13-9 in the third and 21-19 in the fourth.

Last Friday, the Cavaliers outlasted Flint Powers Catholic 52-41. Carman- Ainsworth clung to a 31-23 lead at halftime before sealing the win with a 21-18 second half.

Carman-Ainsworth, 9-1 in the SVLBlue and 16-2 overall, will play for the Saginaw Valley League championship against Mt. Pleasant, tomorrow at home. The game will tip approximately at 7:30 p.m., following the girls’ championship game between the Lady Cavaliers and Midland Dow at 6 p.m.

The Cavs close out their regular season on the road Monday at SVL-Blue rival Grand Blanc, 9-1 and 13-6 overall, at 7 p.m.