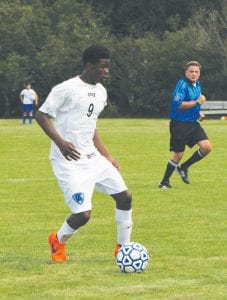 FLINT — As the host of their own tournament last weekend, the Carman-Ainsworth varsity soccer team came out and claimed an opening-game win over Lake Fenton 1-0. Clio then beat Birch Run 1-0 to set up a consolation game match up that the Cavaliers wound up winning 2-1. That just left Clio’s 3-0 championship game victory over Lake Fenton on goals by Jacob Hoyt, Ian McDowell and Kaleb Ethridge.

For the Cavs against Lake Fenton, Ray Macko had eight saves and Ameer Jawhair managed the only goal of the game for the Blue Devils with 12 minutes left in the first half. Scoring for Carman- Ainsworth against Birch Run was Isaac Young assisted by Yahya Abdelhay, Ryan Macko connected on a pass from David Rawls and burning the net for the Panthers was Luke Miller.

Carman-Ainsworth then had a Saginaw Valley League game at Midland Dow on Monday that it lost 8-0.

The Cavaliers game on Sept. 16 was canceled because Flint Northwestern does not have enough athletes to field a team this season. Carman- Ainsworth had a SVL game at Flint Southwestern yesterday.

Carman-Ainsworth will swim in the County Meet today and Saturday at Fenton. – D.N.