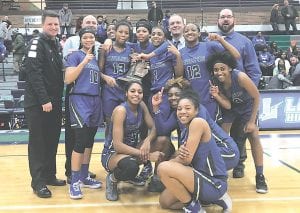 The Cavaliers trailed 15-4 after the opening quarter, but pulled to within three, 19-16, by halftime. Heritage outscored Carman-Ainsworth 19-12 in the third and 15-7 in the fourth to move on to the regional final yesterday against Midland Dow, which beat Marquette 49-38 in the other regional semifinal.

Last Friday, the Cavaliers clinched the Div. 1 district title with a 60-53 overtime win over Flint Kearsley at Lapeer.

Carman-Ainsworth had a healthy 21-7 lead after the opening stanza, but Kearsley began to chip away at the deficit with an 11-8 second quarter that left the Hornets still trailing 29-18. Kearsley then outscored Carman-Ainsworth 17-6 in the third to knot the score at 35-all. Both teams scored 16 in the fourth to force the extra quarter tied at 51-51, which Carman-Ainsworth took, 9-2.

Aaliyah McQueen led the Cavaliers with 19 points and 12 rebounds and Destiny Strother and Chenelle King each reached double figures with 14 apiece. Kearsley was led by Junior Sydney Walker with 14 points, and senior Mackenzie Ramey chipped in with 11 points.