Cavs win one, lose two in the past week 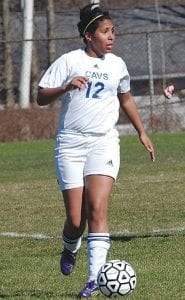 Jasmine Jones carries the soccer ball down field for Carman-Ainsworth.

FLINT — Mt. Morris came to town on Monday and went sent home with an 8-0 defeat at the hands of the Carman-Ainsworth soccer team.

The Cavaliers came out strong in the first half with six goals and added two more in the second half to enact the mercy-rule victory. Selena Johnson made one save in goal for the shutout victory.

Jasmine Jones stole the show offensively as she either scored or assisted on seven of the eight Carman goals. Jones scored four goals to lead the way. Aiana Jamison recorded a hat trick with three goals and Amber Richard tallied the final goal and added two assists. Toni Jarnigan and Rachel Roop added one assist each.

Last Friday, Carman traveled to Lapeer West and returned with a 4-0 defeat. West broke open a close game with three second half goals.

The Panthers were led by Savannah King, Mallory Rozewicz, Shannon Brown and Justine McGeary with one goal each. Assists went to Maddison Smith, Hayley Schroeder, April Crowe and McGeary. 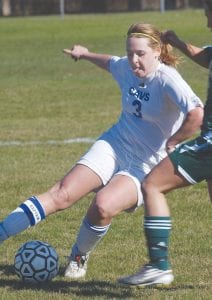 Big Nine rival, Davison, came to town last Wednesday and escaped with a 3-2 victory against the Cavs. The game was tied at 1-1 at the half but the Cardinals were able to outscore Carman, 2-1, in the second half to earn the victory.

Jones once again proved to be the dominant force on offense for the Cavs, scoring both goals. Katie Walker scored two goals to lead Davison while Chelsea Howe added one. Brittney Groulx and Amber Muller each had one assist.