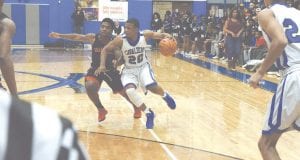 “Tonight, I thought our guys competed at a very high level,” said Grand Blanc coach Mike Thomas. “I thought the energy, intensity and effort was there. Credit to Carman-Ainsworth’s defense. We didn’t do a very good job at taking care of the ball in the second half. Their full-court pressure and offensive rebounding gave us problems.”

Kortez Toles scored a team-high 23 points to lead the Bobcats, while Jakarus Smith added 20 points. Lon Martin came up with 12 points and Cameron Cyborowski tossed in 11.

No stats for Carman-Ainsworth were reported in time to meet press deadlines.

The Cavaliers, 1-0, travel to Clarkston tonight at 7 p.m. and then to Cass Tech on Saturday for the Tip-Off Classic at 1:45 p.m.