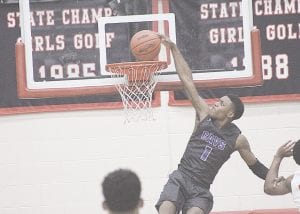 Carman-Ainsworth’s Jayden Nunn dunks during the second half of Friday’s loss at Grand Blanc. Photo by Joe Oster

The Cavaliers jumped out to a 14-3 lead after the first that ballooned to a 30-9 advantage by halftime. Carman- Ainsworth outscored the Cardinals 25-11 in the third and 13-6 in the fourth to cap off the victory.

The Cavaliers split over the weekend, losing to Grand Blanc 63-56 on Friday but defeating Grand Rapids Union 70-53 at Saturday’s Redhawk Showcase.

“I scheduled this for a reason,” said Carman-Ainsworth coach Jay Witham of the two games in as many days. “If you do make a run to the Breslin [for the state championship], you are going to a play a back-to-back on a Friday and a Saturday. You got to recover quick and see what you’re made of.”

In Saturday’s loss, the Cavs fell behind 12-10 in the first quarter and 27-24 by halftime. Grand Blanc extended its lead to 29-24 by the 6:52 mark of the third quarter. Carman-Ainsworth bounced back quickly, as a three-pointer by Jones and a monster dunk by Nunn tied the game at 29-29 with 6:07 left in the frame. Jones’ three was assisted by Ellison. After Brown drew a charge on Grand Blanc’s next offensive possession, the Cavs took their first lead of the half when Green split a pair of free throws, giving Carman-Ainsworth a 30-29 lead at 4:54. The Bobcats responded with a 7-2 run and eventually built a 38-35 lead with under two minutes left in the third. Jones tied the game up with an and-one layup and free throw. His block during the next possession on the defensive end led to a jumper by Nunn, which at :56 gave the Cavaliers a 40-38 lead that they would take into the final frame.

Jones continued his tear in the fourth, as his fast break dunk extended the Cavs’ lead to 42-38 with 7:40 remaining.

“We were just running our stuff and also playing good defense,” said Witham of Carman-Ainsworth’s play in the third and early fourth quarter. “We were able to get out and run, which we wanted to do. During that little run, we played good defense. They took some bad shots, and we got the rebound and got out. We got some 3-on-1’s and 3-on-2’s, whether we converted them or not I can’t remember. We had chances.”

Grand Blanc battled back to tie the game at 51-51 with 2:57 left and then took the lead when Ty Rodgers made an and-one layup after corralling a missed three-pointer. Rodgers’ free throw gave the Bobcats a 54-51 lead at 2:48 that would hold for the remainder of the game. Grand Blanc sealed the victory with free throws, as freshman RJ Taylor made 5-of-6 during the final 1:17 of regulation.

“I think we kind of came down and settled for some shots,” said Witham. “We took some quick shots. We were running our stuff so pretty [earlier]. We were getting to the basket and getting wide-open looks. Some of the shots didn’t fall. That’s going to happen, but then we took a couple bad shots and let them get back in [the game]. They got to the free-throw line. They made their free throws, and we missed some crucial free throws. Some were on the front end of a one-and-one. It was just a great game overall.”

Nunn scored a team-high 14 points for the Cavaliers. Ellison scored 12, Scroggins added nine and Jones chipped in eight. Green finished with six points, Brown had five and Hollis had two.

In Saturday’s victory over Grand Rapids Union, Hollis led Carman- Ainsworth with 20 points. He was also named the game’s MVP after going scoreless in the opening quarter.

Ellison finished with 13 points. Green and Jones added 11 points each.