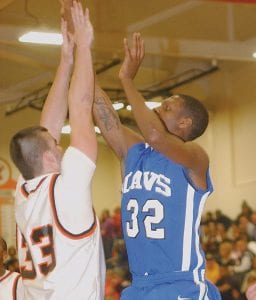 Anton Wilson puts up a shot against Flushing.

FLINT TWP. — Nothing has come easy for Carman-Ainsworth in Big Nine Conference basketball this season.

While the Cavaliers have five double digit victories in their 11-4 overall record, they’re 3-1 in the conference, with no win by more than nine points.

The latest was a 53-46 victory over Flushing last Friday, in which the Cavs trailed, 9-7, after one quarter and still led by only four points early in the fourth. A 7-0 run finally put the pesky Raiders away for the second time this season. Carman survived the first meeting, 50-47, on Jan. 14.

The Cavs surged ahead in the most recent game with a 16-6 second quarter that gave them a 23-15 halftime lead. But Flushing battled right back with a 20-15 third quarter that pulled the Raiders within 38-35 going into the final eight minutes.

It was still a game at 44-40 before Carman scored seven straight points, six of them by Denzel Watts, to make it 51-40.

The victory set up a showdown with Powers Catholic for the league championship Friday at Carman- Ainsworth. The fourth-ranked Class B Chargers beat the Cavs, 62-48, at Powers on Jan. 21.

Even if they beat Powers, the Cavs would still have to win at Davison on Feb. 25 against a team that nearly beat them at Carman on Jan. 28.

Carman had two non-league games sandwiched around the Flushing game. The Cavs beat Flint Northwestern, 65-52, on Feb. 1 to go to 2-0 against Flint city teams. They’ll try to complete a city sweep next Tuesday at Southwestern.

Watts led the Cavaliers with 26 points and Wilson had 21. Gerald Holmes pitched in eight points and Morse had six.